Startling revelations last week as the story-of-the-year-so-far flashed across our TV screens, daily news sites, Twitter timelines and Facebook feeds. Hashtag PanamaPapers quickly trended across the social media multiverse and the world was dutifully outraged by the revelations exposed by what has been sensationally referred to as “the biggest data dump in history”.

And the amazing scoop exposed by the release of the Panama Papers? Wait for it … the rich and powerful hide their money in offshore accounts in small Caribbean countries blessed with beautiful white sandy beaches!

The 2.6 terabytes of leaked information (that’s 650,000 of your favourite iTunes tracks to you and me) released last Monday, on the surface at least, appears to be a noble and gallant attempt to expose the scourge of the international tax haven and the one percenters whose bankers lounge around at work all day in bermuda shorts and bare feet sipping daiquiris in the shade of cane-roofed cabanas.

But it didn’t take long for the Panama Papers to start smelling more stitch-up than scoop of the year.

As hashtag PanamaPapers shot up the trending charts, one could be forgiven for thinking the hashtag should instead have been PutinPapers. An image of the Russian President, looking downwards with a diabolical grin, or grimace, depending on the image, inevitably accompanied the headline and hashtag. In images or file footage, social media, news websites, TV news coverage, all appeared to implicate Vladimir Putin as the chief culprit of this worldwide criminal enterprise. ABC News, The Sydney Morning Herald, SBS News, Al-Jazeera English and even Wikileaks all posted early Panama Papers articles on Facebook accompanied by an image of a conniving Vladimir Putin. Certainly, there were many more similar examples.

Wow, Vladimir Putin caught red-handed by the Panama Papers! Well, not quite.

While other notables such as Ukrainian President Petro Poroshenko, Saudi King, Salman bin Abdulaziz bin Abdulrahman Al Saud and Iceland’s PM, Sigmundur David Gunnlaugsson, were all directly implicated in the Panama Papers, all that could be pinned on Vladimir Putin was that two of his friends were clients of the Panamanian shell company peddler, Mossack Fonseca.

In Panama Papers: Here’s who has been caught in the fallout of the Mossack Fonseca leak ABC reported:

“The leak uncovered a suspected money laundering ring involving close associates of the Russian president, Vladimir Putin. A close friend of Mr Putin’s was put at the top of the offshore empire worth more than $2 billion which has made his circle extremely wealthy.”

Similarly, The Sydney Morning Herald also implicated the Russian President in its article Panama Papers scandal: Who are the biggest names? published on Tuesday, 5 April.

Among the likes of President Poroshenko, soccer player Lionel Messi, actor Jackie Chan, the Saudi King and daughter of former Chinese President Li Peng, were two of Putin’s close friends, according to the Herald.

These included Sergey Roldugin, whom the Herald noted “was ‘almost like brothers’ with Putin in the late 1970s. He is godfather to Putin’s oldest daughter.

“… he owns three offshore companies. One of them ‘gained major influence’ over Russia’s biggest truck-maker, and another controls a big share in Russia’s largest television advertising buyer.”

Arkady and Boris Rotenberg described as “friends of Vladimir Putin” were also included in the Herald’s list of the biggest names implicated.

“The billionaire brothers were childhood friends of Russian President Putin, bonding over martial arts. They have amassed a multibillion-dollar fortune through contracts with state and state-owned companies, and are named in US sanctions.”

And in Panama Papers explainer: What you need to know published on Monday, 4 April the Herald reported that:

“Early reports indicate that associates of Russian leader Vladimir Putin and of the family of Chinese president Xi Jinping are implicated in the papers.

“The prime ministers of Iceland and Pakistan are also mentioned in the papers.

“Although Putin is not personally named in the papers, they reportedly show some of his closest friends have made and concealed millions in ways that would have been assisted by his patronage.”

So, despite the fact no mention of Putin has come to light so far in the data leak of about 11.5 million documents, major western news agencies all directly implicated Putin by using something far more powerful than mere words in this age of celebrity, narcissism, social media mania and 8-second attention spans. That is, of course, images.

So the question begs to be asked: Was plastering Putin’s image everywhere in relation to the Panama Papers merely a coincidence involving like-minded news editors, or a concerted attack by western media to directly discredit the Russian President?

To consider this question, we should look at how the Panama Papers came to light.

The Panama Papers were first leaked to German newspaper Süddeutsche Zeitung around 12 months earlier. Overwhelmed by the sheer volume of documents involved, that paper engaged the International Consortium of Investigative Journalists (ICIJ) to help co-ordinate reporting and research.

The ICIJ then involved other media outlets in the project, including Fairfax Media’s The Australian Financial Review.

Who is the ICIJ? And who supports them?

So, just who is the ICIJ exactly?

“Founded in 1997 by the respected American journalist Chuck Lewis, ICIJ was launched as a project of the Center for Public Integrity to extend the Center’s style of watchdog journalism, focusing on issues that do not stop at national frontiers: cross-border crime, corruption, and the accountability of power. Backed by the Center and its computer-assisted reporting specialists, public records experts, fact-checkers and lawyers, ICIJ reporters and editors provide real-time resources and state-of-the-art tools and techniques to journalists around the world.”

Some of those leading news organisations include the BBC, La Monde, The Guardian and The Sunday Times, Huffington Post, Fairfax Media’s The Age and Sydney Morning Herald, The New York Times and Washington Post, and the Canadian Broadcasting Corporation (CBC).

You can find the full list of collaborators here.

And who supports the ICIJ? Again, from the website …

“The ICIJ is a non-profit organization. We give our work away for free. We rely heavily on charitable foundations and on financial support from the public. Without your help, we cannot exist.”

While they seek your support to exist, it appears they are amply supported by some of the biggest names in the (philanthropy) business.

“We are also very grateful for the support of the Australian philanthropist and businessman Graeme Wood.”

But that’s not the full story. Dig a little deeper and we find the Center for Public Integrity, (from which the ICIJ was launched as a project) “is fortunate to enjoy the generous support of foundations and individuals around the world.”

That generous support comes from the likes of such (often New York-based) philanthropists as:

Check out the full list of of those generous supporters here.

With donors like that, I’m not expecting the CPI or ICIJ to come knocking at my door selling $2 raffle tickets any time soon. 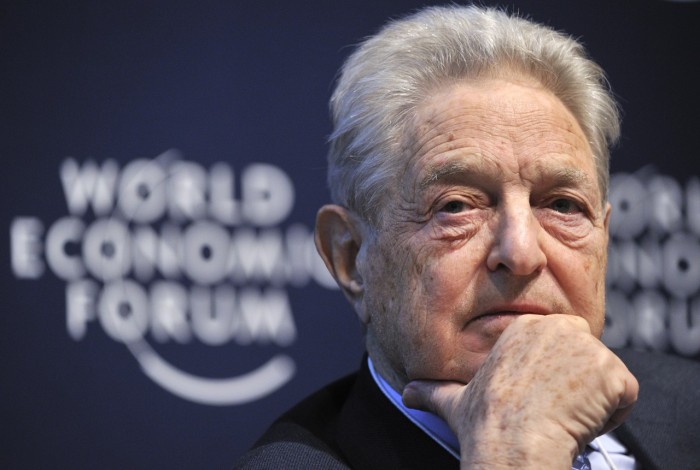 Philanthropist, behind-the-scenes activist & Master of the Universe, George Soros. Oh, and he really doesn’t like Putin all that much either.

Prominent Americans named in the papers

So, we have Putin’s buddies, members of the Chinese elite, Jackie Chan, the Ukrainian President, the Icelandic PM and David Cameron’s daddy … there’s gotta be a load of Wall Street bankers, wealthy industrialists and DC politicians named in the papers too right?

Well, according to USA Today, the answer is no, not really.

“The German newspaper that first obtained the Panama Papers said Thursday the names of few prominent Americans have been found in documents that show how some of the world’s most powerful people hid money from tax authorities.

“One possible reason why comparatively few Americans appear in the documents could be that U.S. citizens have no reason to contact a law firm in Panama,” the Munich-based media group said. “That’s because offshore companies can easily be created in U.S. states such as Wyoming, Delaware or Nevada.”

Oh, well. We’ll have to wait for the next big data leak from a prominent Wyoming, Delaware or Nevada law firm. Don’t hold your breath.