Major General Smedley Butler earned the highest rank in the U.S. Marine Corps, accumulating numerous accolades as he helped lead the United States through decades of war. He later became an ardent critic of such militarism and imperialism.

“War is a racket,” Butler famously said, and Wilkerson — who has also turned critical of U.S. imperialist policy — agrees with and admires the esteemed Marine. 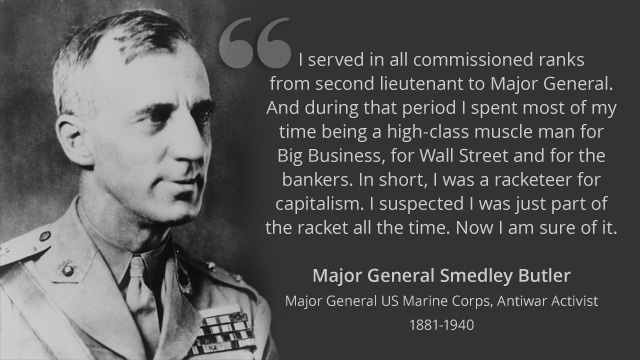 Wilkerson, who served as chief of staff to former secretary of state, Colin Powell, has grown tired of “the corporate interests that we go abroad to slay monsters for.”

Of the profiteering scheme that wars have come to embody, Wilkerson quoted Butler:

“Looking back on it, I might have given Al Capone a few hints. The best he could do was to operate his racket in three districts. I operated on three continents.”

Noting Butler’s brief but accurate characterization of what Eisenhower called the military-industrial complex, Wilkerson added that today’s war machine “is more pernicious than Eisenhower ever thought it would be.”

Col. Wilkerson: Starling revelations or just telling us what we already know?

The willingness of such weapons and military equipment corporations to excuse the transgressions of repressive and abusive regimes in the Middle East and Asia for the sake of profit, Wilkerson asserted, stands as evidence Eisenhower underestimated the extent the to which the problem would manifest.

“Was Bill Clinton’s expansion of NATO — after George H. W. Bush and [his Secretary of State] James Baker had assured Gorbachev and then Yeltsin that we wouldn’t go an inch further east — was this for Lockheed Martin, and Raytheon, and Boeing, and others, to increase their network of potential weapons sales?” Wilkerson asked.

“You bet it was,” he answered his own question.

“Is there a penchant on behalf of the Congress,” he continued, “to bless the use of force more often than not because of the constituencies they have and the money they get from the defense contractors?

“You bet. It’s not like Dick Cheney or someone like that went and said let’s have a war because we want to make money for Halliburton,” Wilkerson explained, describing such decision-making as “pernicious.” 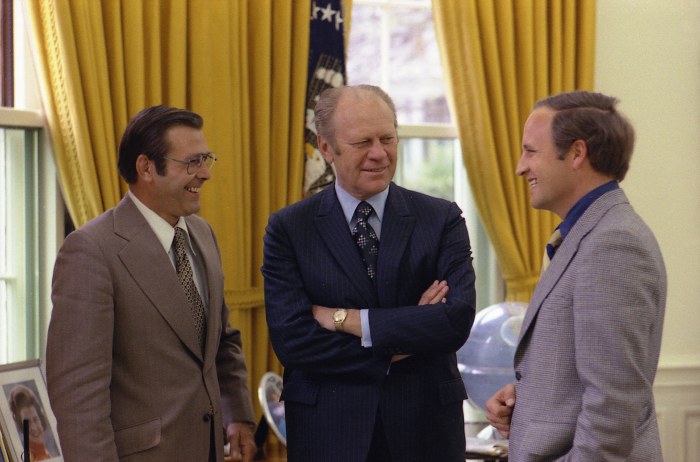 Taking his description a step further, Wilkerson characterized those corporations flooding congressional elections and political PACs with cash as “another pernicious influence.”

Relating another ill of the U.S. war machine, Wilkerson repined the creep of privatization of “public functions, like prisons,” for which the former Bush official places greatest blame on Republicans — though Democrats appear as eager about the shift. Salon mentioned Hillary Clinton’s speech from 2011, during her tenure as Secretary of State, in which she stated, “It’s time for the United States to start thinking of Iraq as a business opportunity.”

Indeed, journalist Jeremy Scahill extensively reported and investigated the enormous army of private contractors operating in Iraq and Afghanistan — with a particular focus on Blackwater. Run by notorious mercenary Erik Prince — who recently became the subject of an investigation by the Dept. of Justice and other federal agencies — Blackwater appeared to operate so unpredictably as to essentially be a rogue organization.

Scahill penned an article for the Guardian in 2007, revealing the exact troubles with privatization Wilkerson referred to — there were 48,000 ‘private contractors’ working for 630 companies in varying capacities in Iraq.

“In many respects,” Wilkerson continued, “it is now private interests that benefit most from our use of military force. Whether it’s private security contractors, that are still all over Iraq or Afghanistan, or it’s the bigger-known defense contractors, like the number one in the world, Lockheed Martin.”

Contractors have arguably done the most to damage U.S.’ international relations and accountability than any other factor — except for the corporations paying them. All of this profit for belligerence has clearly benefited one de facto policy: American imperialism.

“We now dwarf the Russians or anyone else who sells weapons in the world,”Wilkerson noted. “We are the death merchant of the world.”

This article (Former Bush Official Just Confirmed That Our Wars Are for Corporate Interests) is free and open source. You have permission to republish this article under a Creative Commons license with attribution to Claire Bernish and theAntiMedia.org. Anti-Media Radio airs weeknights at 11pm Eastern/8pm Pacific.